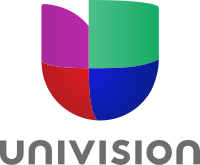 Univision (Spanish pronunciation: [uniβiˈsjon] (About this soundlisten)) is an American Spanish-language free-to-air television network that is owned by Univision Communications. It is the United States’ largest provider of Spanish-language content.[2] The network’s programming is aimed at the Latino public and includes telenovelas and other drama series, sports, sitcoms, reality and variety series, news programming, and imported Spanish-language feature films. Univision is headquartered in Midtown Manhattan, New York City,[3] and has its major studios, production facilities, and business operations based in Doral, Florida (near Miami).

Univision is available on pay television providers throughout most of the United States, with local stations in over 60 markets with large Latin American communities. Most of these stations air full local newscasts and other local programming in addition to network shows; in major markets such as Los Angeles, Miami, and New York City, the local newscasts carried by the network’s owned-and-operated stations are equally competitive with their English-language counterparts ratings-wise. Chief operating officer Randy Falco (who was appointed to the position on January 18, 2011, and officially took over as CEO on June 29 of that year) has been in charge of the company since the departure of Univision Communications president and CEO Joe Uva in April 2010.[4][5] In March 2018, it was announced that Falco would be retiring and stepping down as CEO.[6]

History
Beginnings as Spanish International Network
Univision’s roots can be traced back to 1955, when Raúl Cortez started KCOR-TV, an independent station in San Antonio, Texas, which was the nation’s first Spanish-only TV outlet.[7] The station was not profitable during its early years, and in 1961, Cortez sold KCOR-TV – now known as KWEX-TV – to a group headed by Mexican entertainment mogul Emilio Azcárraga Vidaurreta, owner of Mexico-based Telesistema Mexicano (the forerunner of Televisa). Cortez’s son-in-law Emilio Nicolás Sr., who helped produce variety programs for the station, held a 20% stake and remained as KWEX general manager for three decades. The new owners helped to turn around the station’s fortunes by heavily investing in programming, most of it sourced from Telesistema Mexicano.[8]

On September 29, 1962, Azcárraga and his partners launched a second Spanish-language station, KMEX-TV, in Los Angeles. KWEX and KMEX formed the nucleus of the Azcárraga-owned Spanish International Network (SIN), created in late 1962. SIN was the first television network in the United States to broadcast its programming in a language other than English. From 1963 until 1987, SIN was managed from offices in New York by Rene Anselmo, an American who had worked for Azcárraga in Mexico City for eight years as head of Telesistema’s programming export subsidiary. Having supervised the launch of KMEX, Anselmo spearheaded SIN’s expansion, first into the New York City area, when it founded WXTV in Paterson, New Jersey (licensed in 1965 and launched in 1968), next in Fresno, California (licensed in 1969 and launched in 1972 as KFTV), and then by acquiring WLTV in Miami in 1971. That year, Azcárraga and his partners incorporated these five stations (separately from SIN) as the Spanish International Communications Corporation (SICC), with Anselmo named as president.[9]

Over the next 15 years, SIN and SICC would create other top-rated Spanish-language television stations throughout the United States; these included KTVW in Phoenix and KDTV in San Francisco (both owned by Anselmo) and a part-time affiliation with WCIU-TV in Chicago. The Mexican ownership interest in SIN and SICC transferred posthumously from Emilio Azcárraga Vidaurreta to his son, Emilio Azcárraga Milmo, in 1972. On July 4, 1976, the network began distributing its national feed via satellite, which originally was delivered as a superstation-type feed of San Antonio’s KWEX-TV, before eventually switching to a direct programming feed of SIN, allowing cable television providers to carry the network on their systems at little cost. Between the mid-1970s and late-1980s, SIN began affiliating with startup Spanish-language stations in markets such as Dallas–Fort Worth (KUVN) and Houston (KXLN), as well as with independent stations that previously broadcast in English.[10][11]

In Chicago, SIN moved its programming from WCIU-TV to new full-time affiliate WSNS-TV in July 1985. After WSNS was sold to Telemundo in 1988, what had become Univision moved its programming back to WCIU-TV, which agreed to air Univision programming on weekday evenings and weekends.[12][13] In 1994, the network purchased English-language independent WGBO-TV after WCIU-TV turned down Univision’s request to become a full-time affiliate in favor of maintaining its longtime multi-ethnic programming format. WGBO-TV became an Univision-owned station on December 31, 1994.[14][15][16][17]